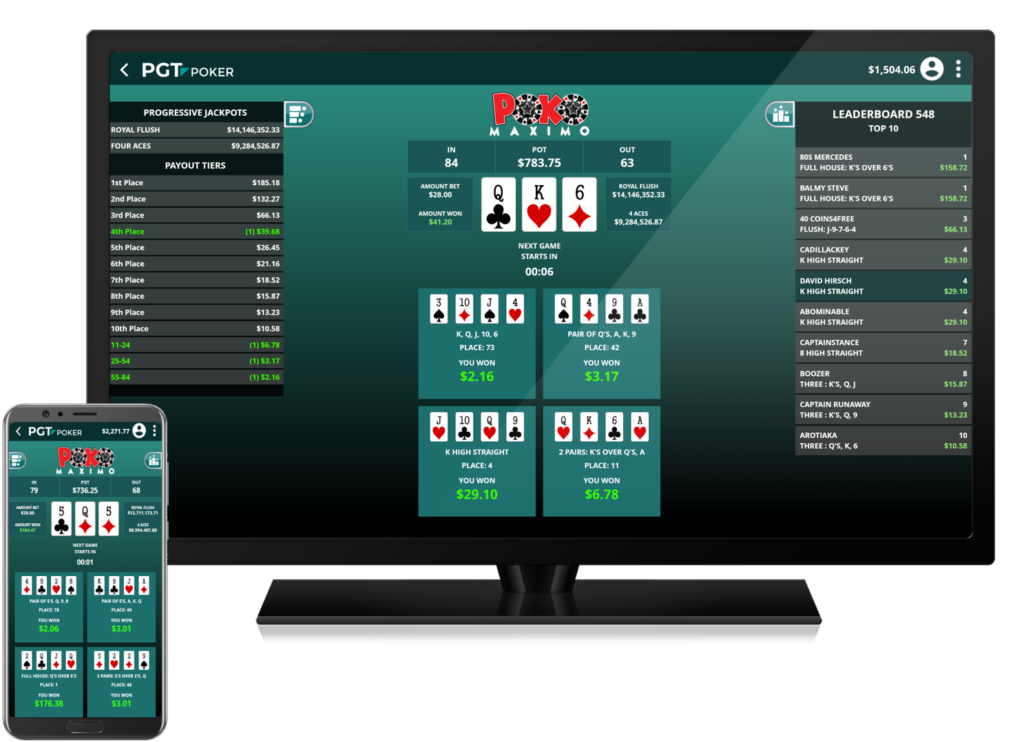 PokoMaximo is a continuous-play, 7-card massive-multiplayer game with successive 90-second rounds.  Each round is the equivalent of one hand of poker.  At the end of each round, each finishing hand is scored based on its best 5-card poker hand combination and then ranked.  PokoMaximo is not designed to be a winner-takes-all game. Payouts are broken down into payout tiers with stronger hands falling into higher payout tiers that are awarded a greater relative share of the pot.

GAME LOBBY.  In the Game Lobby, you will see a placard a for each open tournament.  Each placard essentially represents an open “Table”; however unlike traditional Texas Hold’em, each table has an unlimited number of seats.  To play in a tournament, click the placard’s PLAY button.  You will then be seated at the tournament table and when the current round ends, you’ll be dealt into the next round of the game.

STEP 1.  SET THE NUMBER OF HANDS TO PLAY.  In PokoMaximo, each player can play up to four hands per round.  To play a hand, before the round starts, simply toggle the hand’s control to IN.  Once the countdown clock ends, all hand s designated as IN will be dealt into the round.

STEP 2.  ANTE.  When the round starts, your account will be debited the amount of the ante.

STEP 3.  CARDS DEALT.  At the beginning of the round, three cards are removed from the deck and dealt face up.  These are the Community Cards.  Every hand has these cards.  Next, each hand is randomly dealt four Hole Cards from the remaining 49 cards face down.  Hole Cards are not mutually-exclusive.  So, some hands will have the same Hole Cards.  However, in PokoMaximo, order matters and there are over 5 million hand permutations.  So, it is highly-unlikely that two hands will have the same cards in the same order.

STEP 4.  BETTING STAGES.  There are three betting stages.  At the beginning of each stage, one Hole Card is revealed.  Players then have approximately 10-seconds to decide whether to place an additional bet to stay in the game, or fold the hand and sit out until the next round.

STEP 5.  UPDATES.  After each betting stage, the size of the pot, the number of hands in and out and each hand’s place and payout tier are updated.  This information is designed to enable you to determine whether to stay in or fold during the next betting round.

STEP 6.  SCORING, RANKING & PAYOUTS.  After the the fourth Hole Card is revealed, the best 5-card poker hand combination of each remaining hand is calculated and then the hands are ranked.  Payouts are then administered according to the final calculated payout tiers.  If two or more hands tie, then they are awarded an average payout of each place that falls in the tie.  The round then concludes and the next round begins.

How many decks do you use?  Conceptually, this is a challenging question.  First we remove the Community Cards from a standard 52-card deck and then each hand is dealt its Hole Cards from the remaining cards of the deck.  Since these cards are not mutually exclusive, each hand essentially has its own 49-card deck.

Why do you reveal the Community Cards and not the Hole Cards?  If PokoMaximo employed a true Texas Hold’em style format where each hand’s Hole Cards were dealt face up and the Community Cards were dealt face down, then players could collaborate and deduce the unrevealed hole cards.  For example, if you know that a fellow player has the Ace of Spades as one of their hole cards, then you can deduce that the Ace of Spades is not one of the unrevealed Community Cards.  This gives you an edge.  By dealing the Community Cards face up and making it such that each hand’s Hole Cards are not mutually exclusive, we have eliminated any advantage players might get by collaborating.  This insures game integrity! from a

Imagine an unlimited number of people playing in a single-hand of poker!

PokoMaximo is a first-of-a-kind format the enables an unlimited number of people to play in a single hand of poker.  Unlimited players means unlimited revenue potential. 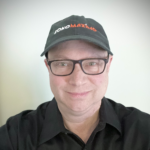